Onomatopoeic words are words that name a "thing or action by a vocal imitation of the sound associated with it" (Crystal, David. The Cambridge Encyclopaedia of Language. Cambridge University Press, New York, NY. 1997.)

Onomatopoeic words mimic the sounds they represent; the sound of the word imitates the sound the object makes. The words are the creation of our human mind and in different cultures and languages the words for the same sounds differ. The MEOAW Project explores commonly recognised animals across cultures through the onomatopoeic sounds that we assign to them and the way that we humans interpret and create so many different possibilities. The MEOAW Project seeks to find a way to present this material to provide a point of discussion – the beginning of a fascinating conversation between cultures. It is an artistic invention exploring sound mimesis, the intersection of language and perception, and language reflecting nature.

In 2006 when Anna Glynn travelled to China to represent Australia at the Shanghai International Art Fair she was speaking to a new Chinese friend about animal sounds and she made one of the common sounds of a dog from her culture - woof woof. Her friend replied with the Chinese onomatopoeic expression wang wang. This small beginning has led Glynn to begin to explore the differences in languages between cultures in referencing commonly recognised animals.

The project continued in 2013 in Australia, Norway, Sweden and Hong Kong. Glynn uses inventive ways to present the material, to provide a point of discussion, a discourse – the beginning of a fascinating conversation between individuals and cultures. The MEOAW Project is ongoing and Glynn actively pursues opportunities to work in new language and cultural locations.

Public presentations of the MEOAW Project include many aspects from a multimedia palette including video, sound, interviews, original paintings and music. Glynn has created a template of common iconic animal images and translating them through the use of Chinese paper, ink and wash into silhouettes which are incorporated into an animated video.

A MEOAW Project documentary is underway where Anna Glynn is collecting songs and stories from different cultures with onomatopoeic animal sound content. Interviews and footage and location material is being gathered.

The MEOAW Project grand vision also includes a possible interactive keyboard for the public to control the sounds and images as well as the creation of a strange but wonderful ‘Onomatopoeic Animal Orchestra’ which would use the recorded sounds in a composition.

Glynn’s work seeks to collaborate with local communities and artists to share and expand the project.

Glynn was awarded Artist-in-Residence in the Department of Visual Studies, Lingnan University, Hong Kong where she undertook research, lectured, developed new works and mounted an exhibition at the University.

Lingnan University was a key location for her to develop and expand the MEAOW Project and provide an environment where she had the opportunity to discuss, share and filter ideas - a stimulating place to process, create and experiment with methodologies, collection and presentation concepts. 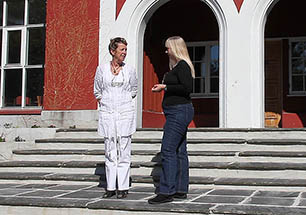 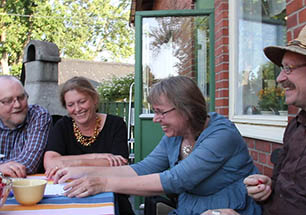